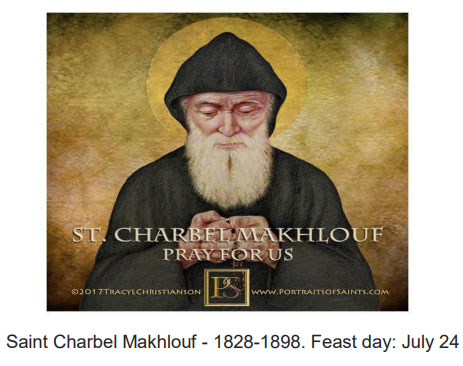 First time in Ireland and all are welcome.

1st Class relic of St Charbel at St Patrick Church Fermoy P61 N446 on Tuesday 31st January.
Agenda – 9.40 am Holy Rosary, followed by Holy Mass at 10 am followed by a blessing with the relic.

St Charbel was born Youssef Antoun Makhlouf in a small village in Lebanon in 1828, to a poor religious family. His father was a mule driver who died when Youssef was only three. Two of his uncles were hermits and Youssef wanted to follow their example. As a boy, he tended the family’s, flock of sheep and goats and would spend the day praying at a small grotto where he had installed an icon of the Blessed Virgin.

Youssef Makhlouf entered the Maronite Monastery of St. Maroun, (A Lebanese Maronite order) at 23 and was ordained a priest in 1859, and took the name Charbel after a second-century martyr. He served there for 16 years, then retired to the hermitage of Sts. Peter and Paul. Charbel lived a severely ascetic life of prayer, mortification, and self-denial and had a remarkable devotion to the Eucharist.

There are over 26,000 miracles attributed to the intercession of Saint Charbel Makhlouf since his death in 1898. You could say he has a bit of a track record—and he’s not slowing down anytime soon.“We’re seeing more miracles in these past two years than we have in the past decade,” Father Louis Matar, the Maronite priest who keeps a tally of the saint’s miracles said in an interview.

St. Charbel was a Maronite monk and priest who lived in Lebanon. The Christian community in Lebanon remembers the holy man for his miraculous healing desire to unite Christians and Muslims. To read more about the miracles and find out more about the life of this holy hermit, visit the official website of the saintly cause -
www.saintcharbel.com.